Cortlandt resident Daniel Del Monte opened a contracting business in 2006. The business began as a provider of handyman services and later did such larger jobs as kitchens, bathrooms and basements, as well as window and door installations. 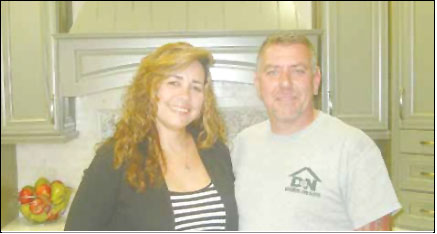 “We really found a niche with the kitchens and the bathrooms,” he said. “That urged us to move on and open up a showroom and focus on the kitchens and baths.” About two-and-one-half years ago, Dan and his wife, Nancy, opened D & N Kitchens and Baths in Montrose. The D & N refers to the couple’s first initials. “We live in the Town of Cortlandt, so it just made sense to stay with in the town,” Nancy Del Monte said.

“We offer everything you would possibly need to do your kitchen or your bathroom,” Daniel Del Monte said. Among the items sold at the store are windows, doors, tile, plumbing fixtures, cabinets, and flooring, he said. “We install everything,” he said. “So you don’t have to worry about hiring a plumber. You don’t have to worry about hiring an electrician. You come in, you buy everything here and I take care of everything.” The store’s customers mainly come from throughout Westchester County.

Dan said he became interested in becoming a contractor after he was disappointed with the work that had been done by contractors on his family’s first home. “I’d come home and things were a mess,” he recalled. “So I started doing things on my own.” Dan said another reason why he wanted to start his own contracting firm was he was getting tired of working in the retail industry. Nancy Del Monte works in the finance area of the family business. She previously worked as a corporate accountant. Daniel Del Monte said he enjoys his business. “I get a great joy out of being able to go in go in and make an improvement in somebody’s home and seeing them very happy,” he said. Nancy Del Monte said it easy for the couple to work together. “We know each other. But we never get a separation,” she said. “It’s still good.” “The worst part is we’re always working,” Daniel Del Monte said. “Even when we’re home we’re still taking about work. There’s no escaping it” Dan said his business will be getting larger. “We plan on expanding the showroom within the next five years, he said, adding he wants the business “to keep improving.”

“This is a unique situation,” Nancy Del Monte said. “You can go into some of the other kitchen and bath places in area and they contract a lot of things out. And I think customers don’t want to deal with a contractor and then buy material from another place I feel like we’re really tapping into part of the industry that this area doesn’t have.”